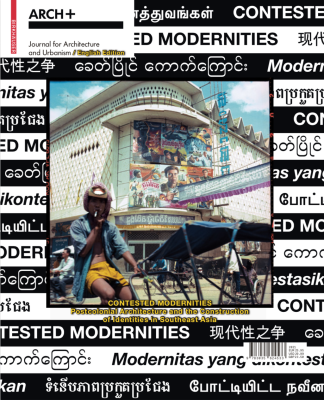 Architecture and urban planning have always been instruments of identity construction. The vision of an idealized past and the design of a better future are two sides of the same coin. ARCH+ Contested Modernities examines architectural modernism in Southeast Asia as an expression of the region’s struggles for a postcolonial future. It also reminds us how closely architecture and ideology are intertwined, for better or worse. For worse, because modernism has been used, top-down, by rulers of various stripes to advance their nationalist interests. For the better, because a progressive notion of society was always associated with designs for the future. But to view architecture solely from the perspective of ideological superstructures would be to overlook the decisive aspect of its agency. Not only does architecture shape our thinking as a social narrative, it also intervenes as a substructure—as the material basis of people’s everyday life. Because of this dual nature, architecture is able to transcend not only ideologies but cultural boundaries as well. The multiform expressions, interpretations, and adaptations of modernism in Cambodia, Indonesia, Myanmar, and Singapore, which are presented and critically discussed in this issue, illustrate this balancing act.

Architecture and urban planning have always been instruments of identity construction. Not only does this apply to the reconstruction of lost historical buildings and city ensembles—much of which is currently being undertaken in Europe with underlying right-wing agendas—­ it also applies in a special way to the epoch of modernity.

Encounters with and Discussions about Architectural Modernism in Southeast Asia

A History of Architecture by Banister Fletcher Sr. and Jr., a worldwide classic of 20th century architectural education, was first published in 1896. According to Johannes Widodo, who teaches architecture and urban history in Singapore, this book illustrates the West’s ignorance about the architecture of entire regions of the world—a condition that persists to this day.

The modern Asian Architecture Network (mAAN) was formed in  Macau in 2001 to kickstart a discourse on Asian modernisms. Small “m” and plural “modernisms” speak for an understanding of modern architecture as an ongoing process of production and adaptation of architectural forms constantly evolving in a continuous layering process.

Many states that gained political independence from the late 1940s on nonetheless remained culturally and economically dependent on their former colonial powers. Much of the time, industries and educational systems were lopsidedly oriented towards the colonial power, making independent economic activity barely possible.

After Cambodia’s independence in 1953, under the leadership  of prince Norodom Sihanouk, the country sought to transform its image from that of a small colonial state with an agrarian economy  to that of a modern independent nation. An extensive building campaign was central to this effort. The buildings of this era have come to be known as  New Khmer Architecture.

“I wanted to marry Cambodia with the Occidental World”

The collage drawings displayed here are the outcome of Genealogy of Bassac—a project started in 2014, realized in partnership with the School of Constructed Environment at Parsons School of Design, hosted by Sa Sa Art Projects, and partly funded by Khmer Archi­tec­ture Tours. Genealogy of Bassac mapped the Bassac River­f­­ront complex, in central Phnom Penh, as a community-based participatory exercise.

“Architecture is about Everything and Nothing”

In the late 1960s and early 1970s, Mam Sophana was one of the main protagonists of New Khmer Architecture. Having studied in the USA, his style differed remarkably  from that of other Cambodian architects of his time, many of whom studied in France shortly before or immediately after independence.

In 1953, the government of the Republic of Indonesia launched a competition for the design of  a new national mosque in Jakarta. As a symbol of postcolonial national identity, the project was considered of the utmost importance. Its site would be the northeast corner of Merdeka Square, designated by President Sukarno to be the epicenter of the capital city. Of the 27 entries, Friedrich Silaban’s modernist design won the competition, but the realization of his colossal vision proved more difficult than expected.

A competition for a new national monument to rise in the middle  of Jakarta’s Merdeka Square (Inde­pendence Square)—formerly Koningsplein (King’s Square) during Dutch colonial rule—was announced by President  Sukarno in 1955. At that time, the area was surrounded by rows  of villas belonging to European dignitaries who sought to  avoid the hustle and bustle of the old town of Batavia, which was  full of mosquitoes and considered unsanitary.

Visualization of National History: From, by, and for whom?

Since its founding in 200, Indonesia-based architectural practice d-associates has drawn widespread acclaim for projects such as the Tamarind House in South Jakarta and the DRA House in Bali. In preparation for the 2018 Asian Games, the architects were commissioned with the renovation of the Gelora Bung Karno Sports Complex in Jakarta, which was originally commissioned by President Sukarno for the 1962 Asian Games.

On July 19, 1947, shortly after negotiations were held securing the independence of Burma, now Myanmar, Burmese nationalist leader and now national hero, Aung San,1 along with seven other ministers, were assassinated during a cabinet meeting  in Rangoon. To commemorate the­ victims, a small pavilion was erected at the foot of the famous Shwedagon Pagoda in the early 1960s, which was to be replaced by a new mausoleum in 1982.

A Mausoleum for Aung San in Rangoon

In 1922, the Legislative Council in British Burma was recast  as a partially elected body for the first time. For its meetings,  a modest pavilion was erected in the courtyard of the Secretariat, the seat of British colonial and ad­ministrative power in Burma­ since the late 1880s. Another 52 years would pass until the par­liament, then called the People’s Congress, received its own building.

The Tradition of Modernity

Tiong Bahru – A modernist district in the tropics

Tiong Bahru was the first housing estate by the Singapore Improvement Trust (SIT), designed and built between 1936 and 1950. Created during British colonial rule with the passing of the Singapore Improvement Ordinance of 1927, SIT’s main mandate was  “to provide for the improvement of the Town and Island of Singapore” by clearing the slums, redeveloping the narrow back lanes of the traditional shophouse neighborhoods, and generally improving the conditions of dwellings, notoriously unsanitary and overcrowded.[1]

The Future of Singapore’s Recent Past

It is only in the last 20 to 30 years that an awareness has developed in Singapore of the importance of conserving its postwar modern architectural heritage. This has hardly  been a smooth process, but one fraught with difficulties and tensions between authorities, civic groups, and the public.

Tay Kheng Soon is a prominent architect and planner in Singapore, not to mention one of the staunchest critics of its urban development throughout his career over the last 50 years—through the think tank he cofounded, Singapore Planning & Urban Research Group (SPUR), as partner of the architectural firm Design Partnership, or his own firm, Akitek Tenggara.

An Embedded Worlding – The Practice of Lim Chong Keat

Southeast Asia as a “Geocultural Problem”