The Property Issue. Ground Control and the Commons

“Who owns the land?” is a question central to all societies, because space is as vital a resource as air and water. And yet architects seldom explicitly address the question of land ownership. Is this because, as the architect Florian Hertweck writes, they “primarily produce an illusion of the political, not least because they want to see their projects realized”? This issue of ARCH+, co-edited by Arno Brandlhuber and Olaf Grawert, station+/ETH, aims to help change how we view urban land, and encourage land law reform to return land governance to the local level.

What is to be done? Not much, because there is no alternative but to politicize land. A lot, because everyone else has failed to do so until now. Politicizing land means first developing a political economy of the city and showing that the current state of Ownership and Access, as the first section is called, is anything but “natural.” This situation is illustrated by the lead article, The Ground-Rent of Art and Exclusion from the City by the philosopher Wolfgang Scheppe, who uses the example of Venice to describe current urban development from a broad historical perspective.

Another realm whose order has always been presented as natural is the domestic sphere. To this day, the work of reproduction—meaning all activities in the domestic sphere such as raising children, care, cooking, cleaning, and housekeeping, which are still largely done by women—falls outside of the economic equation. This blind spot is revealed with the help of feminist theory in the second section on Production and Reproduction. Dolores Hayden, Silvia Federici, and Dogma/Realism Working Group examine the domestic sphere as a genuinely political place. Ultimately, the question of land ownership cannot be discussed without mentioning the housing question—the two are closely intertwined.

A main theme in this issue is empowerment, as people form new solidarity networks to defend existing rights of access while simultaneously negotiating new ones. The third section thus examines the notions of Right and Solidarity. In addition to authors such as Raquel Rolnik and Naomi Klein, who view the question of landownership from a colonial perspective, Joseph Nevins calls for a “right to the world.”

The many contributions on politics and economics reveal not only prevailing lines of conflict, but also the potential to redefine policy with the long-term aim of establishing land, and thus the city, as a commons.

Over the long term, principles of the social economy must form the basis of the urban economy. What the practice of the commons, also called commoning, might look like will be examined in our next issue, due for release in July 2018, in conjunction with the exhibition An Atlas of Commoning in cooperation with the ifa (Institut für Auslandsbeziehungen). The exhibition will open June 22, 2018, in Berlin.

For the German version of The Property Issue, click here

International shipping will only be processed after receipt of payment; therefore we recommend to use PayPal. 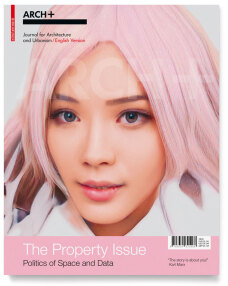