Published by ARCH+, the artist book BERLIN 2013/1983 by the Canadian artists Daniel Young and Christian Giroux is an attempt to answer two interrelated research questions: what does one year of new building construction in a city look like, and how does this contemporary city compare to that of a generation earlier? Berlin is an intriguing case study, not least because of the changing geo-politics altering the urban fabric of both East and West Berlin. With encyclopedic pretension, the artists attempted to document every building completed in Berlin in 2013 presented alongside buildings erected one generation (approximately thirty years) earlier.

Devised as an imaging machine to destroy other images, BERLIN 2013/1983 counteracts the usual Berlin narratives in its analytical approach and presentation of its 784 building ‘pairs’. The artists began by photographing subjects at the northwest edge of the city and then traced a path that covers the entire urban area by zig zagging east and west following a boustrophedonic (as ‘the ox plows’) pattern, a process that began in February and ended in May of 2015. Rather than emphasizing a historical (centralized) or a modern (radial) urban development, the project’s radically democratic form gives the periphery of the city the same value as the centre. The iconic buildings of Berlin-Mitte are only found in the middle of the book and are lost among the sheer abundance of images of new suburban structures within this non-hierarchical inventory of architectural form, format, and function.

Inspired in part by the tradition of conceptual photography projects dedicated to architectural knowledge, BERLIN 2013/1983 was conceived as a rigorous dérive and is a radical addition to the architectural discourse and published guides to buildings in Berlin. What was devised as a materialist case study in the political economy of construction of our contemporary moment – and of the just recent past – develops into a study of a local vernacular unfolding over time.

Available in December, the artist book is a perfect Christmas gift for art, architecture and book aficionados. Order now.

Published by ARCH+
Designed by Katja Gretzinger
Produced in partnership with the Art Gallery of Guelph, Ed Video
Supported by David & Yvonne Fleck, Phyllis Lambert, the Jack Weinbaum Family Foundation, and the Canada Council for the Arts

Daniel Young and Christian Giroux have been making art together since 2002. They produce sculpture, public art, film installations, and books. Their work is the product of an ongoing conversation concerning the modernity of the mid-century, the production of space and the built environment. Young and Giroux rework modernist forms of abstraction using consumer goods and industrial prototyping methods, construction systems and componentry to produce sculptural objects that partake in architectural discourse. Their film works constitute a form of research on sculptural form in the built environment from the architectural to the domestic scale.

Solo exhibitions of their work have been presented at Prefix Institute for Contemporary Art, Toronto; Musée d’art contemporain de Montréal; Künstlerhaus Bethanien, Berlin; and The Rooms, St. John’s. BERLIN 2013/1983 was exhibited at the Toronto International Film Festival, Deutsche Architektur Zentrum in Berlin, and the Art Gallery of Guelph. Young and Giroux’s last artist publication, Infrastructure Canada, was published by Oakville Galleries in 2016. Giroux is an Associate Professor in the School of Fine Art and Music at the University of Guelph. Young splits his time between Berlin and Toronto. 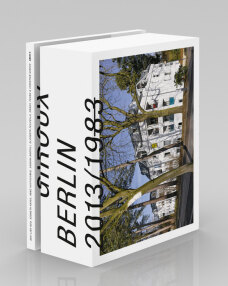