The Property Issue – Ground Control and the Commons 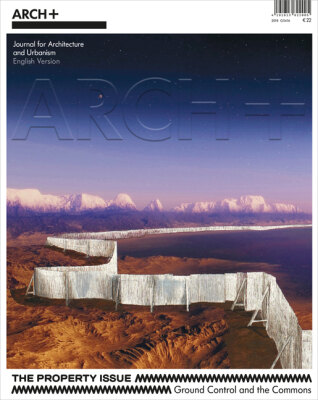 “Who owns the land?” is a question central to all societies, because space is as vital a resource as air and water. Yet architects seldom explicitly address the question of ownership. Is this because, as the architect Florian Hertweck writes, they “primarily produce an illusion of the political, not least because they want to see their projects realized”? This edition aims to help change how we view urban land, and encourage land law reform to return land governance to the local level.

Free sample
1–4
“Philosophers have only interpreted the world in various ways; but what matters is to transform it.”
Visual Essay
Anina Brisolla, Jan Kage

8–13
What do we humans do after having destroyed this world? We ﬂy to another planet and colonize it. And what is the ﬁrst thing we do there? We stake out land, put up fences, and take possession. That is roughly how you could describe the narrative of Anina Brisolla’s series, entitled prospect.
Essay
Wolfgang Scheppe

14–31
Venice is an instructive model for the—literally— exclusive re-dedication of urban space in accordance with a totalitarian rationality of revenue per square meter.
Essay
Harald Trapp

32–39
“The rooms are growing, the house stretches out.” – Friedrich Schiller, Song of the Bell

64–69
One model that is gaining traction among some of the city’s housing advocates is the community land trust (CLT). CLTs have a dual tenure structure, where the ownership of land and the ownership of property are separated.
Essay
Marija Marić

Property Is a Verb – On Social Ownership in Yugoslavia

70–77
Architecture exists in the world as a property. This implies the right to build, access, exclude, claim, inhabit, abandon, demolish. Property, therefore, is a verb.
Essay
Markus Hesse

78–83
It is, by now, common knowledge that the process of globalization in recent decades has profoundly transformed the realities of life in cities, along with their prospects for development.
Case Study
LISER: Luxembourg Institute of Socio-Economic Research, Christian Schulz

Land as Project: On Territorial Construction

86–95
Land (and infrastructure) are never neutral, or purely technical and utilitarian, but always strategic, political and ecological.
Interview
Patrik Schumacher

Free sample
102–107
I have been asked by ARCH+ to write a rebuttal to Patrik Schumacher’s widely disseminated claims for an “anarcho-capitalist architecture”—the latest iteration of his “parametricism” crusade.
Interview
Renée Gailhoustet, Florian Hertweck, Niklas Maak

132–141
Cooking food, caring for children, and cleaning house: tasks often thought of as “woman’s work,” to be performed without pay in domestic environments, have always been a major part of the world’s necessary labor. Yet no industrial society has ever solved the problems that a gendered division of this labor creates. Nor has any society overcome the problems that the isolated, residential location of this work creates, both for housewives and for employed women who return from factories and ofﬁces to a second job at home.
Essay
Silvia Federici

142–147
“Women’s work and women’s labor are buried deeply in the heart of the capitalist social and economic structure.” – David Staples, No Place Like Home (2006)
Visual Essay
Marisa González

154–173
Living and Working Today more than ever, production transcends the boundaries that, since modernity, separated the domestic space from the workplace. New forms of production imply the overlap between work and life, to the point that they become indistinguishable.
Interview
Douglas Spencer, Harald Trapp, Robert Thum

180–185
The “sharing economy” is not some isolated shrink-wrapped cube in “cyberspace”; it’s just another reﬂection on capitalism and the massive atlas of digital labor practices.
Essay
Peter Mörtenböck, Helge Mooshammer

186–189
When the ﬁrst large-scale participatory projects in architecture and urban planning began to take shape in the second half of the twentieth century, particular attention was given to questions of design and the distribution of function within space.

The Right to the World

192–199
On World Refugee Day 2016 (June 20), the Ofﬁce of the United Nations High Commissioner for Refugees (UNHCR) reported that the number of forcibly displaced persons—a category that includes refugees, asylum-seekers, and those displaced within their own countries—had reached more than 65 million at the end of 2015, a record high in the agency’s history.
Essay
Michaela Friedberg

The (False) Dissolution of Territory

200–207
In keeping with the cultural transcendence of private space, the study of private property has turned away from the geopolitical and territorial, towards an understanding of privacy as a constructed phenomenon devoid of physical boundaries.
Essay
Naomi Klein

You and What Army? Indigenous Rights and the Power of Keeping Our Word

208–215
It was 2004 and I found myself sitting in on a private meeting between two important First Nations leaders and a representative of one of the three most powerful credit rating agencies in the world.
Interview
Raquel Rolnik

Free sample
218–223
It is the beginning of 2017 and I am preparing to go live on Belgian TV to talk about the anti-corruption and pro-justice #rezist movement in Romania. It is my fourth invitation to appear on radio and TV following the attention that Belgian newspapers gave to my career shift into politics.
Visual Essay
Christopher Roth

ARCH+ uncovered: Who Owns the Land? Highlights in the History of Land Reform

226–229
Initially, land reform movements emerged in response to the plight of peasants. Since the beginning of industrialization and the accompanying urbanization, the focus has increasingly shifted to the city. This timeline highlights the development of ideas about land reform, with an emphasis on modern times and German-speaking regions.