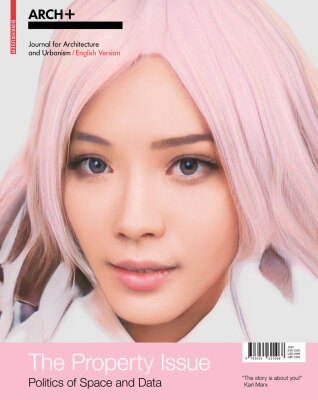 Who owns the land? This question is of crucial importance for all societies and their coexistence. This is because the availability of land and property controls the production of space and the social order. The fact that land (space) is as vital to life as air and water means that its use should not succumb to the unmistakable play of free (market) forces and individual whims.

Who owns data? For urban planning, the issue of data ownership has become just as relevant as land ownership. In this issue we therefore discuss the politics of space and the politics of data, the real and virtual capital of the city of the future. The debate is guided by two main questions: How do we deal with space and data as planning resources? And what role do architects and urban planners play in the digital society?

Free sample
1–2
“Philosophers have only interpreted the world in various ways; but what matters is to transform it.”
Interview
Christian von Borries, Olaf Grawert, Arno Brandlhuber

The Disappearance of Architecture and Society in the Algorithm

16–35
Venice is an instructive model for the—literally— exclusive re-dedication of urban space in accordance with a totalitarian rationality of revenue per square meter.
Essay
Milica Topalović

36–47
Land (and infrastructure) are never neutral, or purely technical and utilitarian, but always strategic, political and ecological.
Glossary
ARCH+

52–59
One model that is gaining traction among some of the city’s housing advocates is the community land trust (CLT). CLTs have a dual tenure structure, where the ownership of land and the ownership of property are separated.
Interview
Hans-Jochen Vogel, Brandlhuber, Christopher Roth

70–77
“The rooms are growing, the house stretches out.” – Friedrich Schiller, Song of the Bell
Interview
Patrik Schumacher

Free sample
84–89
I have been asked by ARCH+ to write a rebuttal to Patrik Schumacher’s widely disseminated claims for an “anarcho-capitalist architecture”—the latest iteration of his “parametricism” crusade.
Interview
Renée Gailhoustet, Florian Hertweck, Niklas Maak

102–109
It is, by now, common knowledge that the process of globalization in recent decades has profoundly transformed the realities of life in cities, along with their prospects for development.
Interview
Raquel Rolnik

114–115
The platform business model is predicated upon a voracious appetite for data that can only be sated by disregard for privacy (and often workers’ rights), and constant outward expansion. As they become ever more central to the global economy, Nick Srnicek argues that it’s incumbent on us to understand how they function.
Diagram
David Djuric, Kristof Croes

116–117
As of June 2019, Alphabet has made a total of 270 acquistions (including those made under Google, before restructuring.)
Interview
Deane Simpson, Arno Brandlhuber, Olaf Grawert

The City of Platform Capitalism

124–129
In 2017, Sidewalk Labs, a subsidiary company of Alphabet, won a bid for the development of Quayside, a prototype for a smart city located on a 12-acre brownﬁeld along the Toronto waterfront.
Interview
Douglas Spencer, Harald Trapp, Robert Thum

Gig Space – Deliveroo and the Algorithm Based Gig Economy

154–161
The “sharing economy” is not some isolated shrink-wrapped cube in “cyberspace”; it’s just another reﬂection on capitalism and the massive atlas of digital labor practices.

164–173
In late 2016, on a conference stage in Palm Springs, California, decision scientist Hannah Bayer made a bold declaration: “We’re going to measure everything we can possibly measure about 10,000 people over the course of the next 20 years or more. We’re going to sequence their genomes; track everywhere they go, everything they eat, everything they buy, everyone they interact with, every time they exercise.”
Project
Dennis Häusler, Johannes Rebsamen, Hannes Grassegger

A Wall of Data Points

174–183
A dam wall is a monument to the way in which humans deal with water as a force of nature. In the Alps, water is stored in glaciers and groundwater streams, and is gradually fed into rivers. Climate change is slowly erasing the image that characterizes the Swiss landscape.
Interview
James Bridle, Michaela Friedberg, Olaf Grawert

Agency in the Age of Decentralization

Luxury and Paranoia, Access and Exclusion: On Capital and Public Space

198–203
We get into an Uber, whose route, calculated by GPS, takes us past the Kremlin. However, when we arrive, the charge is three times higher than usual.
Essay
Michaela Friedberg

Nothing is for Free – The Cost of Privatizing Public Services

204–209
In 2013, crowds of people watched as New York’s last silver payphone booths were removed from its streets. Since their debut in 1905, these once ubiquitous metal vessels became places of maﬁa ﬁlm backdrops, ad-hoc work spaces, and temporary shelters for the lost or homeless—veritable icons of the New York cityscape.
Essay
Hannes Grassegger

The City as Enemy

210–215
One can only understand the form and nature of the struggles in Hong Kong— and also the message of the protesters— by understanding that they are taking place in a smart city.
Interview
Ludger Hovestadt, Arno Brandlhuber

A Political Forum for a Digital Public

220–221
Three of China’s most valuable tech companies—Baidu, Alibaba, and Tencent (BAT)—and their subsidiaries in comparison with the US technology giants Alphabet (formerly Google; Alphabet has served since 2011 as the parent company of Google and its subsidiaries), Apple, Facebook, and Amazon—also known by the acronym GAFA.
Essay
Benjamin H. Bratton

An Update on The Stack

222–235
“The whole age of computer has made it where nobody knows exactly what’s going on.” – Benjamin H. Bratton