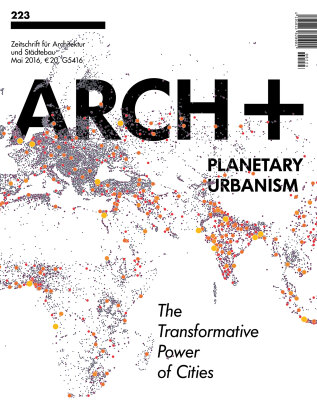 Cities were always centres of innovation and the driving force of developments, throughout all epochs and cultures. The organisation of life in cities formed the starting point for the development of structures based on the division of labour and hence the release of creative potentials that benefited science, technology and the arts, for the accumulation of capital, increasing prosperity and the refinement of life. With few exceptions, cities were also the stages on which the struggles for more social equality and for societal progress played out. Cities are likely humankind’s greatest cultural achievement and, in this respect, a marker of the Anthropocene period, the geological age defined by human activity.

The Transformative Powers of the Cities

Free sample
5–9
“The 21st century will be the century of cities: Urban environments will become the main organisational form for almost all human societies” and almost all the future issues of humanity will be decided in the cities. The unstoppable progress of global urbanisation however raises more questions than we can currently answer.
Diagram
Simone Hüttenberend

The Future will be Decided in the Cities

The Right to the City

14–23
That collective right, as both a working slogan and a political ideal, brings us back to the age-old question of who it is that commands the inner connection between urbanization and surplus production and use. Perhaps, after all, Lefebvre was right, more than forty years ago, to insist that the revolution in our times has to be urban – or nothing.
Diagram
Simone Hüttenberend

Planetary Urbanisation: Henry Lefebvre and the Right to the City

26–34
In his analysis, urban society is not an already achieved reality, but a potential, an open horizon. The quality of this analysis is that it transcends mere criticisms of urbanization, and proceeds to explore its inherent possibilities and potentials. However, they can only be realized through a fundamental social transformation − an urban revolution.
Essay
WBGU

The Century of Transition

35–39
Nothing stands still on our planet any more, and above all, hardly anyone stays in the same place. In the Europe of the 19th century, many people who first saw the light of the world in their parents’ home were also laid to rest there. Today, however, anyone who grows up in a residential block, hut or villa is highly unlikely to die there.

I LOCAL EFFECTS OF GLOBALISATION

42–43
The giant trees of Stuttgart represent a unique urban phenomenon. Apart from the fact, that the import of giant trees can be understood as an event of migration, it is the exceptions which lend a city its particularity in our globalised world, where cities become more and more alike.
Case Study
Ira Leifried, Louisa Höppner

44–47
The project aims at raising awareness of environmental degradation due to palm oil production in tropical rain forests against the background of worldwide palm oil consumption through supermarket products and responsibility of consumers.
Case Study
Elizabeth Yarina

48–51
The project conceives of alternative modes of modernisation that create a dialogue between local and global economies and ways of life. Through deforestation and increased agricultural productivity, Adivasi are to take back control over their territories.
Case Study
Ben De Nardi, Michael Davis, Linus Tan, Michael Maginness, Peter Raisbeck, Peter Hogg, Linda Kennedy

52–56
Through the decoupling of the site from the global networks of iron ore extraction, it constitutes a semi-closed system, which cooperates with other similarly occupied degraded landscapes in the region and thus establishes relationships not based on the exploitation of resources and labour power, but on mutual respect and cooperation.
Case Study
Jacob Mitchell, Xuan Kuai, Justine Holzman, Karen May, Giovanni Coakley, Chris He, Sean Williams, Maureen Jackson, Madeline Richard, Sarah Schramm, Jeff Carney

57–59
The social-political economy of shipbreaking is complex and highlights conflicting interests, especially for a developing economy like India. In India, by recognizing shipbreaking as an industry, the state has given clear indication that it recognizes the economic importance of the shipbreaking.
Case Study
Aditya Barve

60–63
The social-political economy of shipbreaking is complex and highlights conflicting interests, especially for a developing economy like India. In India, by recognizing shipbreaking as an industry, the state has given clear indication that it recognizes the economic importance of the shipbreaking.
Case Study
Leon Schubert, Yasin Altunok, Khaliun Aldar

64–67
For participants in the globalizing process, geographical distance is no longer a barrier – goods would appear wherever in demand. However, some goods exceed their usual biography of being exported, imported, and consumed; instead they are artifacts of cultures being transplanted, exercising long lasting and wide-ranging chain effects on localities and identities.
Case Study
Cornelius Hirsch, Felix von der Weppen, Cecil von Treu

The Rush on Foreign Land

76–77
The scale of spatial and social disparity between urban and rural China is no second to any other country in the world.
Case Study
Sheila Seyfert-Menzel, Katalin Gennburg

81–83
Travelling from point A to point B could be as simple as crossing a street, taking a bus to school, or driving one’s car to work. But in between points A and B is the city, with all its complexities.
Case Study
Natalija Paunic, Aleksandar Bursac

84–87
The material seems to trace the immaterial, so that new forms of ephemeral architecture and hybrid urban typologies can emerge, the melting together of place, data space and physiology into a digital-actual mixture observable as a corporeal imprinting of the virtual environments into the physical space that we inhabit.
Case Study
Ivo Pekec, Fereshteh Assadzadeh

88–91
In “Subversive Tehran”, people manage to interact and maybe gradually collectively unveil the repressive veil that has been put over their city.
Case Study
Curie Kure, Hanna Biresch

Just Trust Us – or Take This

92–95
Information and transparency sensitises citizens to topics such as data acquisition and data trade. With this in mind: have fun and “Sapere aude!”
Fallstudie
Martin Dumont, Metaxia Markaki, Nitin Bathla, Alexander Daxböck

The Architecture of the Grid

96–99
The physical networks depicted in this study call for an alternative way of looking at the urban, one which goes beyond urbanrural dichotomies and propagates a global urbanisation feeding off continuous energy networks.
Case Study
Maximilian Pecher, Philipp Schwarzbauer

100–103
Will urbanisation create a Europe with swelling, centralised urban clusters and competing states, or a post-national Europe, where a new kind of interconnectedness enables a multipolar urban development, attuned to regional circumstances? The decision is ultimately a political one.

Manifesto of the 21st Centuryʼs Own Settlement Form

106
Barbarism lurks in the very concept of culture – as the concept of a fund of values which is considered independent, not, indeed, of the production process in which these values originated, but of the one in which they survive. Walter Benjamin, 1937
Project
Günter Nest, Elisa Bertuzzo, Louisa Scherer, Marcus Jeutner, Paul Klever, Anna Sauter, Marian Knop, Lisa Lampe, Tamanna Siddiqui, Farhana Kaniz Sharna, Abdul Kader Khan Komol

107–109
In the course of one decade, house production has become a matter for trained builders, carpenters and even masons, involved in the construction of meanwhile common brick-and-corrugated-iron one storey-house forms.
Essay
Elisa Bertuzzo

On the Myth of Informal Urbanisation: Karail Basti, Dhaka

110–117
It’s still there. Karail Basti lives on, despite everything – despite the major incidents, like the bulldozer operation of 2012 in which 4,000 people were made homeless because a road had to be widened, and the minor ones, such as last week’s fire, caused by a faulty gas line, which affected 22 dwellings.
Case Study
Rainer Hehl, Marc Angélil, Something Fantastic

123–125
In this way, the formal and informal players might finally team up, together creating a “co-produced city”.
Project
Olivia Grandi

126–129
Since the nineties, a completely new and unprecedented urban landscape has come into being as a product of the new booming economy in the Indian city of Bangalore, partly due to its fast growing IT branch.

132–134
The recent transformation of EPM is a well-suited case study to document how water circulation in lowincome households has shifted from a continuous flow to a prepaid drop. Here is where our story begins.
Case Study
Maximilian Pecher

136–137
With sales valued at more than 3 million euros the federal state parliament serves as a second cog that co-determines the selling process. The population itself has no direct influence on the proceedings.
Diagram
Diana Felber, Michael Wicke, Arne Schmitt

142–143
The capital pressure on inner-city areas is higher in Berlin than in any other German city.
Project
Andreas Lang, Simon Delbeck, Evgeniya Panova, Marina Petrova

148–151
The first gated community goes back to 1857. It was established in New Jersey, USA. Ever since, their number has been increasing continuously.
Case Study
David Stephens, Alessia De Simone, Ke Xie

152–153
By means of the cities of Atlanta, USA, Naples, Italy, and Hong Kong, China, the displacement of low-income population strata from preferred urban locations is described in global comparison.
Project
Gerrit Hoffschulte

154–155
The project title “Angry99” hints at the slogan of the Occupy Wall Street movement – “We are the 99%” – and discusses society’s anger towards the greed of a few, culminating in the Occupy-movement’s world-wide demonstrations and camps.
Case Study
Indre Grumbinaite, Safak Korkut, Nicole Lachenmeier, Darjan Hill

World Metropols: About Wages and Prices

156–159
Cities are focal points for social developments and control systems for social order – also regarding the wages paid to the workforces. The unabated allure of the cities is due not least to the fact that compared with rural areas, they offer their inhabitants a wealth of financial opportunities.

Where there is Light, there is Shadow

162–164
Light pollution is one of the biggest problems of the present and it has a deeper impact than one might think. Nowadays, a city counting over 500,000 inhabitants is exposed to a continuous light pollution of at least 60%.
Case Study
Olga Schweigert

165–167
Millions of people are moving from rural areas to the cities – for good reasons. It is in the city that one finds good professional prospects and a vibrant way of living. Still, the urban home has its shady side.
Case Study
Tobias Hahn

The Water Issues of Accra

174–175
Ensuring the sustainability of the urban water metabolism represents a fundamental challenge for the 21st century and the whole Anthropocene period. Rapidly increasing land, food, energy and freshwater demand drives regional land cover and land use change with global consequences that are distributed unevenly across the planet.
Case Study
Bhawna Welturkar

176–177
Such self-sustaining systems call for a context-sensitive, decentralised mode of planning, with each measure developed in respect to local specificities.
Case Study
Luna Khirfan, Mandy Zhang

178–181
Oscillating between the micro, the meso, and the macro scales, the pragmatic attitude and participatory approach will hopefully inspire further practical engagement in coping with climate change.
Case Study
Gabriel Munoz Moreno

182–187
In the end, the system results in an architecture capable of changing and finding the equilibrium between our living ways and the different ecosystems that we inhabit, an architecture that is formed by the natural ecosystem where it is deployed instead of imposing its necessities on it.
Case Study
Klaus K. Loenhart, Daniel Baumgartner, Patrick Fresner, Bianca Nedwetzky, Regina Nemecz, Theresa-Alena Platzer, Roberto Viforcos Giron, Sandra Weinrauch, Katharina Wernig, Marie Theres Baumgartner, Jörg Dittus, Walter Frühwirth, Michael Keser, Philip Marzona, Magdalena Schepe, Anne Schlebbe, Sebastian Wattenberg, Maki Stolberg

Hybrid Practices in the Venice Lagoon

196–201
The understanding of a landscape should begin with the understanding of its geomorphological aspects and the natural processes of land formation that are constantly changing its natural shape over different times and scales.
Case Study
Jasmin Honold, Myriel Milicevic, Leonie Fischer

About Migrating Species and Human Happiness

202–203
The urban densification poses risks to the physical and mental health of us humans, particularly by causing stress-related illnesses. However, staying in, or views of vegetated urban areas can reduce stress and thus, improve city residents’ health.

216–218
If the flood of refugees is seen as a state of emergency that overwhelms the individual, then it stands that asylum seekers en route are excluded from being part of a society.
Case Study
Kristina Mostovaia, Jamila Bräunlich, Doreen Ahmed

A Stranger at Home

The Last Page: Baking a Cake Together