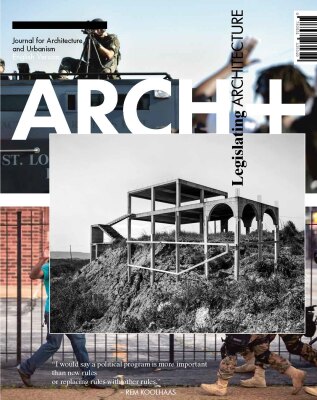 Law has materiality. That is, at first glance, the theme of this issue. The notion that building laws and building codes, that hygiene and safety regulations, that even tax laws manifest themselves in architecture and cities is a commonplace.

Legislating Architecture – FROM GROUND TO HORIZON

Free sample
3–4
Law has materiality. That is, at first glance, the theme of this issue. The notion that building laws and building codes, that hygiene and safety regulations, that even tax laws manifest themselves in architecture and cities is a commonplace.
Visual Essay
Christopher Roth

14–17
Dear Lucy, I have read your essay “Archiving Burroughs: Interzone, Law, Self-Medication” with attention and appreciated, as usual, the way you manage to link fiction, law, and space together. I do think, however, that we should keep this text for a little bit further in our conversation, since its specificity might make us skip over the foundations of the discussion we would like to have about architecture and law. I would like to ingenuously start by stating some obvious facts.
Essay
Alex Lehnerer

Power Is Nothing Without Control

22–29
Thus ran the title of a 1994 advertising campaign by the Italian tire manufacturer Pirelli, which depicted the American track star Carl Lewis crouching in the starting blocks before a race, wearing red high heels instead of running shoes.
Case Study
Mirko Gatti

30–34
When finished in 1915, the Equitable Building, headquarters of the Equitable Life Insurance Company, was the world’s largest office building.
Case Study
Alex Lehnerer

32–33
Completed in 1947, and dubbed the Universal Pictures Building in honor of its principal tenant, 445 Park Avenue was the first postwar building in the setback style to employ a minimalist, International Style aesthetic (and, moreover, the first entirely climate-controlled office building in New York City).
Case Study
Alex Lehnerer

40–45
The work of Los Angeles-based artist Edward Ruscha was particularly influential during the 1960s for the way in which the American city and the car-oriented (urban) landscape were perceived through photography.
Case Study
Alex Lehnerer

46–47
Santa Barbara banned these artificial “weeds.” For Venturi, they’re “almost all right,” while, for Reyner Banham, they were a positive embodiment of the absence of control.
Case Study
Marcus Owens, Christina Antiporda

48–53
The only Ikea in the San Francisco Bay Area is located in Emeryville, California at 4400 Shellmound Street.
Case Study
Matthew Festa

Houston – Land Use In The Unzoned City

Free sample
54–55
The city of Houston, Texas, is famous for many things. It is the fourth-largest city in America, with 2.1 million residents in the city, and nearly 6 million in the metropolitan area.
Case Study
Alex Lehnerer

54–55
Houston has no formally defined, comprehensive zoning ordinance—that is to say, the city has no plan-based authority responsible for separating different types of land use.
Essay
Matthew Festa

Land Use in the Unzoned City

56–57
The city of Houston, Texas, is famous for many things. It is the fourth-largest city in America, with 2.1 million residents in the city, and nearly 6 million in the metropolitan area.
Case Study
Colin Gordon

58–61
In many respects, the script is a familiar one. A deeply segregated American city; an episode of police violence; a week of rage and protest—directed against both the police and the underlying segregation— and a chillingly militarized restoration of fragile order.
Case Study
Marcos L. Rosa

62–65
The freestanding highrise, set back a certain distance from the street as stipulated by law, has been the building typology most commonly adopted by São Paulo real estate developers since the 1960s; the number of these highrises has even seen a sharp increase over the past two decades.
Case Study
Jens Wolter

66–69
A CITY OF COURTYARDS: GROUND RULES FOR GROWTH Buenos Aires is laid out over a large orthogonal grid on the banks of the Rio de la Plata.
Case Study
Quang Tuan Ta

76–77
Ever since Paris had become one of Northern Europe’s most prominent commercial hubs, royal authorities had occasionally sought to introduce isolated measures aimed at preventing the city’s uncontrolled growth.
Case Study
Alessandro Benetti

78–79
In the latter half of the nineteenth century following Haussmann’s push to open the boulevards, forcing large numbers of Parisians out from the city center, the faubourgs of Paris began to develop rapidly in a chaotic and uncontrolled fashion.
Case Study
Katharina Kaufmann, Anh-Linh Ngo

80–81
British land law is rooted in the feudal system, which was introduced to England by William the Conqueror in 1066, after the Norman model.
Case Study
Alex Lehnerer

82–83
The disadvantage of natural light vis-à- vis its counterpart, shadow, is that it’s harder to describe and standardize.
Interview
Tom Emerson, Arno Brandlhuber

If You Behave Like an Idiot, You’ve Got To Take Responsibility For It!

92–95
Probably the most characteristic feature of Berlin’s urban landscape is the “Berlin block,” with its traditional facades and uniform eaves height of 22 meters.
Interview
Andreas Geisel, Arno Brandlhuber

“More City”: What Is That Supposed To Mean?

102–107
Dieter Hoffmann-Axthelm on Berlin’s Past, Present, and Future

The Regulation, Law, and Ethics Of Architecture In The Refugee “Crisis"

114–117
The falling out between architects and the state can’t only be attributed to the collapse of social housing 30 years ago. It reaches down into the relationship between architecture and the law. Politics, the state, with its overzealous bureaucracy, its prescriptions and regulations, has often—and often rightly so— been viewed as an irritating meddler. The artistry of the architect lay in staying true to one’s vision for a building despite regulations that often seemed obstructive. The relationship between architecture and law has often been characterized by something of a “cult of circumvention.”
Essay
San-Hwan Lu

Primacy of the Market Building Regulations In The United States

118–119
Building regulations give form and shape to the built environment that surrounds us.
Essay
Nancy Raewyn Couling

Legislation Of The Sea: Spatializing a New Urban Realm

120–125
The most in uential territorial initiative of the twentieth century didn’t establish a comprehensive legal basis for space on land, but rather at sea.
Interview
Marc Angélil, Arno Brandlhuber

A Legislative Space Known as Switzerland

It’s Always Easier TO BE AGAINST SOMETHING

136–145
Law has materiality. This insight lies at the core of the ongoing study being carried out by British architect and researcher Liam Ross, one of the most interesting researchers today engaging with the relationship between legislation, building codes, and architecture.
Essay
Max Kaldenhoff, Anh-Linh Ngo

146–151
No other modernist doctrine was as successful as the doctrine of functional separation. Yet hardly any idea today is quite as controversial.
Essay
Imke Woelk

Handbook Of Permit-Free Building In Berlin

155–157
“Property and the right of inheritance shall be guaranteed. Their content and limits shall be defined by the laws.”
Project
baukuh

156–159
If we interpret the phenomenon of real estate, for a moment, from a purely mechanistic perspective, it’s possible to argue that all the private buildings erected in Tirana over the course of the first decade of the new millennium were, in essence, the very same building.
Case Study
Georg Augustin, Sebastian Felix Ernst, Martin Tessarz, FAKT

158–163
Berlin is growing—inward. Ever since political powers decided to forcibly privatize huge swathes of public land, Berlin has been experiencing an ongoing process of redensification.
Project
Christian Kerez

House With a Lake View

168–173
The House with a Lake View is located on the Zimmerberg above Lake Zurich.
Case Study
Achim Reese

174–181
Although all architects continually have to bring their work in line with building codes and land-use regulations, very few of them take a critical approach to the legislative framework that underlies their own practice.

7+1: Luigi Snozzi On Designing The Municipality Of Monte Carasso

Where Every Cubic Foot Counts: On Brooklyn's Mezzanine Loft

No Recourse To Law

196–197
In Germany, the interests of the architectural profession are represented externally and internally by small, separate bodies of two distinct legal types: chambers of architects and architects’ associations.
Interview
Isabella Fera, Arno Brandlhuber

Prishtina, Or Why Legaliziation Matters

198–205
Prishtina became the capital of the Republic of Kosovo upon its declaration of independence in 2008. It is an example of a post-conflict city in which unregulated and informal construction caused considerable social and safety problems. To remedy this, it was therefore necessary to pursue retroactive regulation and work to legalize the illegal buildings.
Essay
Mirko Gatti

214–217
The political and economic variables that dominate architecture make planning a complex process of continual conflict and negotiation; it is the purview of building regulations to simplify production by organizing different urban behaviors into a set of standard, authorized actions.
Zeitung

Some Registers Of Regulation

218–220
The following essay provides an account of some of the key issues raised about the relationship of legislation and regulation to architecture during the course of two major symposia co-organised in collaboration with Katie Lloyd Thomas and Tilo Amhoff over the past six years.
Features