For English version see below

PLANETARY URBANISM – Critique of the Present in the Medium of Information Design, the international competition initiated by the magazine ARCH+ with support by the Federal Foreign Office, Germany, and advised by the German Advisory Council on Global Change (WBGU) has been decided. It was not easy to make a selection among the 125 entries. The jury decided to award four first prizes à 2400 €, seven second prizes à 1300 €, and seven third prizes à 750 €. The pleasingly high number of entries from 31 countries demonstrates the broad international interest in the problems and challenges of urbanization processes as well as in Information Design:

Migration, asylum-seeking and migrant labour, one of the most explosive questions of urbanization, define a bigger thematic group. Many contributions articulate city criticism in respect of environmental consumption and psychological and physical strain on the people as well as the critique of specific not socially oriented local politics, of privatization and speculation. In focus are also problems with basic services and the traffic collapse in rapidly growing cities as well as questions of security, quality of urban space and the integration of nature in the city. A pleasingly number of positive suggestions in strategic intention contrasts this criticism, for example with a bottom-up urbanism, a variety of apps as tool for complex planning tasks up to concrete reality utopias, political visions and sci-fi-like scenarios. The digitalization of all areas of life was also discussed both as critical questioning of “modern life” and as a chance to harmonize living standards. The local and global effects of global economies have been revealed with unusual, not well-known examples. Not least one emphasis was set on the questions of an adequate presentation of social problems and methods of mapping.

The graphic transformation of the contents is as diverse as the subject matters chosen by the participants. Many entries develop their own iconography and original graphic forms in order to depict quantitative relations. Aside from "classic" information diagrams there were also attempts at other, completely new ways of conveyance and of addressing the audience. And, most strikingly, it was not so much the technical potential of electronic media but methodical considerations which played a central role. In Information Design, aside from the depiction of empirical facts through quantitative details – Neurath's "language of numbers" –, the directly conveyed statement via qualitative aspects seems to gain in significance. As much as these approaches may differ, they have one thing in common: the recourse to narrative forms in the communication of contents. Or, briefly, a story is told. Whether graphically or photographically, cinematographically or linguistically, with the means of collage or in the form of separate depictions, as fiction or as satire, with understatement or with hyperbole – all this is more or less of secondary importance against the experimental character of this new form of “information diagram”. We had seen this tendency before very clearly in our first critique of the present-competition “Out of Balance”.

The 125 entries were authored by 386 participants, who organized themselves in teams of varying sizes. About 76 per cent of the participants are students, the rest comes from freelance offices or temporary working groups. The high percentage of students can be explained by the fact that the design or architecture faculties of a number of universities have incorporated the competition into their curriculum.

The results of the competition will be published in a special edition of ARCH+, PLANETARY URBANISM, and exhibited in 2016 in the context of the UN-Habitat-Conference in Quito, Ecuador. 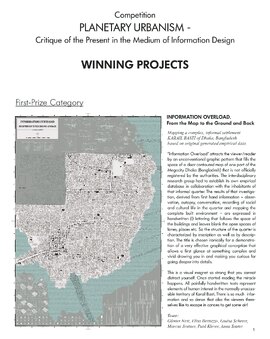 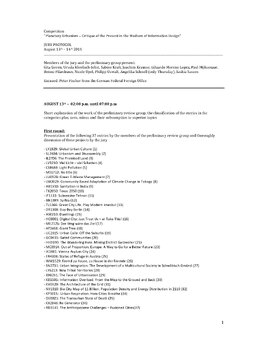 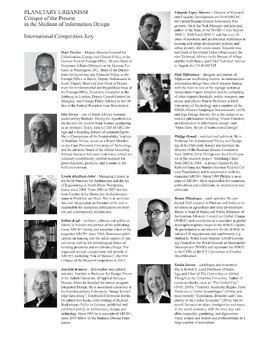 Documentation of the competition “Planetary Urbanism”. This bilingual publication is identical to volume ARCH+ #223.
In stock. Order now. Excluding shipping and handling costs.