“What is a fetish? Something that is nothing in itself, but simply the blank screen onto which we have projected, erroneously, our fancies, our labor, our hopes and passions.” – Bruno Latour in “Pandora’s Hope”

Within its conventional terminology, the concept of the fetish is initially described as polyvalent. Whether as an offset, distortion, projection, substitute or stigmata - basically it is regarded as an overreaching and self-referential relationship to an object, in which reality and vision collide. Although the phenomenon is apparently rather difficult to be depicted or shared – the fetish distinctively teases.

In the strongly visually dominated disciplines of art, design and architecture - and in constant interaction with its medium of representation – fetishistic procedures continuously and supposedly unconsciously set out and blur the boundaries of the taboo. In this spirit, it possibly provides expanding capacities to the disciplines but without dissolving the "rationale" and "other" entirely. Not only the ambiguity of the term makes it appear as an opaque, ever-changing construct of the human psyche.

In relation to the respective discursive subject (or field) the fetish thus acts as a mental catalyst – covertly renders possible what used to be suppressed previously. In search of "architectures of the repressed" is perhaps a way to explain what initially withdraws from an elaborated investigation – as the interaction between space and fetish might eventually reveal to be promising: What new or distorted patterns arise in the projection on the architectural space, provided that it is understood as a “blank screen” in regard to Latour? Considering the metaphysical- or rather aesthetical or atmospherical bias of contemporary architectural renderings (and their built counterparts), what creative properties could be awarded to the fetish - especially as its proficiency now belongs to the everyday practices of the architect?

Whether parish hall or haunted house – techno-temple or bio-blob – dark room or gazebo – fetishistic, “factishistic” or anti-fetishistic – the fifth issue of HORIZONTE seeks for epiphany in the undergrowth of architecture. Aiming at the mediation of the abyss between taboo and fashion, entertainment and exile, we seek for answers to the question whether space may be informed or unmasked through the concept of fetish.

Whether in essayistic form, project- or research-based - HORIZONTE seeks for relevant reflections to the questions above, which critically assess, discuss and challenge the subject matter.

Submission Guidelines:
- Proposals may be submitted as essays, projects, photographies etc.
- Contributors are kindly asked to send a 200-word abstract. Nonetheless further developed material can be sent along, too.
- Essays shall not exceed a maximum of 4000, a project, photographic essay etc. description not 500 words.
- Text files in .odt- or .doc-format. Drawings as .pdf, images as .ti?ff-files.
- Texts should be unformatted in either Times New Roman or Arial. No use of automatic footnote-functions. Please attach numbered annotations at the end of the text.
- Source citations should be formatted in Chicago Style. (see www.chicagomanualofstyle.org)
- Please send a short bio (max. 50 words).
- Submissions should not have been published previously.

All submissions via e-mail to horizonte@archit.uni-weimar.de. Deadline: 31.01.2012 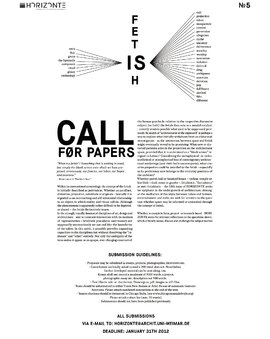